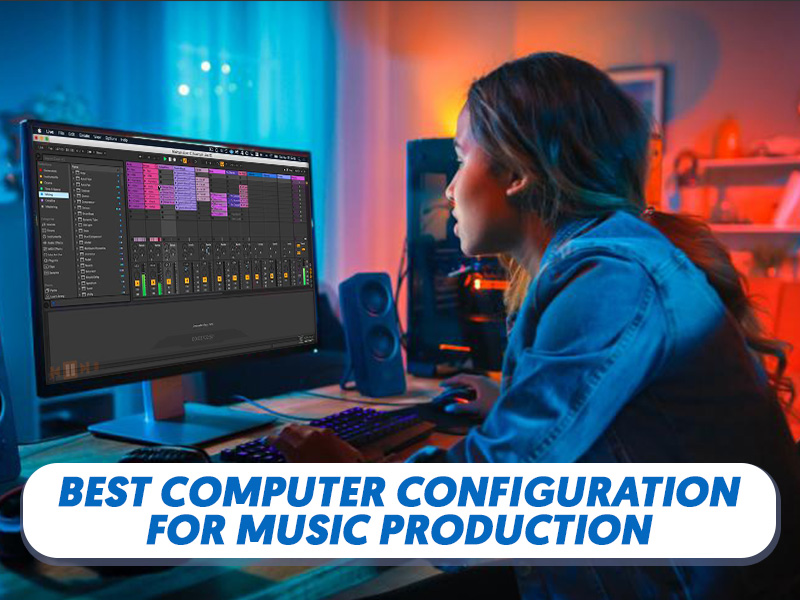 We all know how confusing it is for us to buy a laptop or a system, given the diversified market. Since the advent of computer technology the market has spawned many competing brands. So, which laptop or a desktop machine would ideally be suitable for music production, mixing, mastering, a little bit of photoshop, and some motion graphics?

Since we all know that an artist in the current era needs to have little or some expertise in multiple subjects and not just music production. Like making album art or lyric videos or audio visualizer animations, it is also very important to select a machine which could support all of these functionalities mentioned above. Alright, let’s jump right into it.

A lot of people are confusied as to which operating system to go for, now this could be a bit tricky since there is no definitive answer to which machine would be beneficial, there is a very close competition between windows and mac users. Needless to say, this is also a preferential and a subjective choice; but how do we make this objective? There is a huge difference in terms of the price range when we compare these two operating systems. Also, hardware dependency. Mac operating systems cannot work on just any machine, it requires Apple manufactured machines only.

Coming to Windows, this operating system can be installed in any machine, be it assembled or precomposed machines sold by different companies like Lenovo, Dell, HP, and many more. All of the driver software of the components used in the respective machine is available to download and install for free.

When it comes to using audio interfaces and MIDI controllers or any other audio gear with these operating system, everything works straight out of the box with a Mac. No need to download or install additional drivers unlike windows, where you have to install drivers for every single interface and controllers.

Operability of both the operating systems are easy and user-friendly, almost all the features which are available in Windows are also available in a Mac.

From, the price point of view as well, Windows Home is relatively cheaper than Windows Professional. But when it comes to Macintosh, the operating system itself is free, no matter which version you want to run. However, MacOS is hardware dependent so you need to buy the entire package. The mac operating system keeps updating every year, adding more features, and improving the software everytime.

A key point to note here is, since, Mac has its own hardware and doesn’t make itself compatible with various other machines, it is also very efficient in terms of computational speed and could optimize same operations with lesser computational operations. For instance, if a Mac machine would require 8GB RAM and 2.2GHz of CPU processing to work with Ableton Live efficiently, A Windows machine, would require 16GB of RAM and 3.5GHz of CPU processing power to work with Ableton Live efficiently. But, the windows machine will cost half of what a mac would cost. We can say that Mac has better efficiency but when it comparing budget, Windows takes the lead.

Why RAM is essential for music production, mixing and mastering? The DAW stores the processed audio information in the RAM. Since the processing of the plugins is working in real-time, it would require greater CPU power too, and having more RAM wouldn’t hurt your system in any way.

Whenever buying a Machine, be it a Windows or a Mac machine, always check the minimum requirements of RAM to run the software which you’d be using. More RAM is always better for any software operation. You can visit the software’s website and check for the pre-requisites or minimum software requirements. In my opinion, you should always go for 16GB of RAM irrespective of the operating system. There are various versions of RAM as well, and there is also a direct dependency of the versions of RAM, with their motherboards. So before buying a RAM, always check for its compatibility with your motherboard. The more recent the versions will have faster memory operations. These are some of the versions of the RAM:

This has been a never-ending debate, which processor to go for, whether it’s Intel or AMD, both of them have their pros and cons, and this is where I am going to be explaining, how to go about the selection process and what specifications to look for when buying a CPU.

Generally speaking, if the CPU has more turbo speed but base speed is not very good, which is below 2GHz, then avoid buying those processors. The base clock speed should be at least 2GHz or more and the overclocked frequency should be around 4GHz; for music production, mixing, mastering, Photo editing, and graphic designing.

AMD provides a cooling fan with the processor, unlocked or not. AMD is usually cheaper compared to Intel and has better compatibility with older motherboards. Intel performs a little better than AMD but the motherboard compatibility lasts for only 2 generations. Both of them are giving a very tough competition to one another and both of them are equally good. Depending upon the price range, you can select any of the two processors.

A lot of people are going for Solid State Drives (SSD) because these are relatively faster than conventional SATA HDDs. HDD (Hard Disk Drives) and SSD (Solid State Drive) are primary storage devices that store the data permanently unless the user chooses to delete it. A common notion among people is that the SSDs work faster than HDDs, it’s true, but do you need SSDs, as they are very expensive than our conventional HDDs.

The conventional HDDs has different versions of speeds at which it operates. The HDDs which are currently being used are around 5400RPM (rotations per minute) and the one which offers much faster speed has 7200RPM. If SSDs are not fitting in your budget, you can go for 7200RPM HDDs which would offer relatively lesser speed than SSDs for sure, but much greater speed than 5400RPM HDDs.

For music production, it is advisable to have at least, 512GB of SSD and/or 2TB (Terabytes) of HDD.

A very crucial component if you’re planning on running After Effects for motion graphics, Premiere Pro for video editing, Photoshop for Photo Manipulation/Graphic Designing, or playing games. It is advisable to have a graphics memory of 2GB – DDR5 at least to run these Softwares efficiently.

If the processor requires a discrete graphics card, then you can go for a relatively lesser configuration graphic card, typically with 1GB of graphics memory. Otherwise, for most of the DAWs to function properly, an integrated graphics card is more than sufficient enough.

It all depends on the budget and how comfortable you are with the operating system. Even if you’re going to buy a laptop, the things mentioned above should help you to select a better machine. The rest is completely subjective. I hope this helped you in any way. I’ll see you again in another blog post, till then, keep producing.