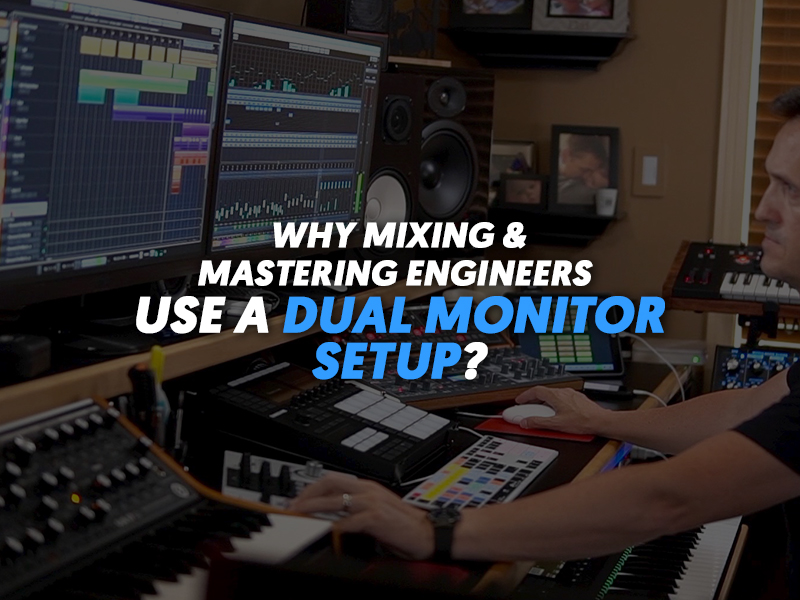 Why Mixing / Mastering Engineers Use Dual Monitor Set up?

I get this from a lot of people throughout the journey of teaching students and also taking seminars, people have all sorts of wild theories about why mixing/mastering engineers use dual monitor setup studio when they have one single monitor to do the same work for them?

I get your inquisitive indignation about the same thing but the point here is, there is no simple or an easy answer to this question, it gets really complex as to why, even today, engineers are still using two monitors set up and they do a really great job at getting the industry standard output from it.

A lot of engineers I have seen, don’t use dual monitor setup, quite often fail to deliver that industry-standard mix. The reasons may be numerous, tackling the root cause of the problem is the only way to get better mixes.

If the room is very well acoustically treated, then comes the problem of either ear training, whether the engineer who is working in the studio is very well trained. This is the main asset of any mixing/mastering engineer. The rest of everything falls right into the place, is what I used to think as well, but not really.

I have personally worked in so many big studios where a lot of engineers dream to work, and I thought having just a pair of monitors from a very well renowned company (like Genelecs, Dynaudio, and Fluid Dynamics) would solve the majority of my problem. But then; there is a problem of referencing it on multiple other audio systems; like the consumer audio speakers; the Bluetooth speakers, and even our smartphone speakers. To do this, I had to every time copy the final master to the flash drives and listen to the same output on multiple speaker systems, which again was a very time-consuming job if you’d ask me.

Not immediately but soon, Yamaha stopped the production of these monitors being produced any further, a lot of people say, the main reason was mainly that, people weren’t really liking the sonic quality of the sound which was reproduced via NS10.

But why was this the case in the first place? Let’s find out!

Majority of the consumer audio speaker systems are heavily colored. By the terms color, I mean the bias of the frequency an audio gear or equipment has when playing any track. So, the consumer audio systems were heavily colored, we could quite often time see the low frequencies (typically ranging from 30Hz to 150Hz) were being very boosted. Also a few brilliance frequencies around (6Khz to 15Khz). Because of this bias towards certain frequencies, the reference monitor speakers were no longer useful to us (us being the mixing/mastering engineers).

The main reason why NS10 and Auratone 5C were used was that these two monitors are completely flat and had no color bias in them. This was a crucial factor in determining how the song would sound when heard on the world’s most flat monitors. The thing about NS10 is, if you’d listen to your favorite track on these monitors, you would start hating those tracks. Because it sounds like chaos, every frequency is haywire, unbalanced, and does not sound, the way we intended it to sound.

See, the thing about having a flat frequency response monitor is, once you make it sound remotely close to how it would sound on most consumer audio systems, the chances are, you never have to check for different audio systems whether it sounds great or not, because it would sound great on almost all the speaker systems. This was the power of having a reference monitor.

And this step changed the entire revolution of having flat frequency bias monitors. We started getting more colored monitors, with low & high end of the frequency spectrum boosted.

By the time, the reference monitors had become obsolete and now, only very few of them have these reference speakers.  In today’s times, if you ever visit a studio and see these pair of monitor speakers lying in the room, the chances are, the output which the studio is yielding have better chances of translating well on different monitoring systems because of the near-flat frequency response monitors. The best part about this is, without even going to the final stage or mixing and rendering the track to hear it on different speaker systems, you can do it right away by using a monitor switch.

Now, I completely understand that you have no budget in terms of buying or referencing on these monitors which is fair enough, not a lot of people start making money right out of their doorway immediately after completing their music production or mixing and mastering course. Yes, having monitors are great but even if you’re mixing it on a piece of studio headphones, you’d still be able to get that kind of Industry-level output, not as good as these pro engineers would, but definitely close. If you haven’t already, do check our Sonarwork Blog post in which, I have explained about different headphones and how do you use headphones for getting good mixes by mixing in the flat frequency response curve. Here are a couple of things you could start doing which would change the way your mix sounds right off the bat:

This wouldn’t be the first time you’d be hearing this but honestly, this is such an underrated thing, because, in spite of the news out there; I have hardly seen anyone using this technique. If you haven’t heard about this, there are two simple things you could do to achieve your mixes that would make it sound better on Mono systems. One way to go about is by adding a plugin on the master channel and making the output completely mono. This would also make the mid-side balance well. For Ableton Live users; this is going to be a piece of the cake for you guys; all you need is to add a utility plugin on the master channel and click on the Mono button. You will definitely see at least 10% of improvement in your mixes if you’re going to follow this method.

After mixing in Mono; you should probably add some stereo width or the side information to the audio; because it is going to sound very pale on the stereo systems; and you’re not giving the benefit of the side information to the people who’d be listening to your tracks on either headphones or dual speakers. While adding stereo width (there are tons of ways to do this) you can keep a look at the correlation meter on the master channel, so that, you don’t go overboard while adding the stereo width to the signal. Voxengo SPAN has a correlation meter which is also another free plugin to use on the Master channel; or you can also use Voxengo MSED; which also has the correlation meter within it.

One of the best reference plugins I have ever used; it gives a close perception of how the mix is going to sound like on different audio systems. So, without exporting and checking it on different audio systems; you can directly use this plugin and see how it is going to sound on various systems like Car audio; tablets, smartphones, laptops, PC speakers, home theatre speakers, and many more.

I hope you guys enjoyed reading the blog and have a brief idea about the world of audio and why music mixing/mastering engineers use dual monitor setup.

I’ll see you guys in another one, thanks for reading this blog. Finally coming to the last point; all of these things are very crucial and important in terms of getting the final mix out; this will make sure that your song will translate well on different speaker systems, and hence; it is better that way.